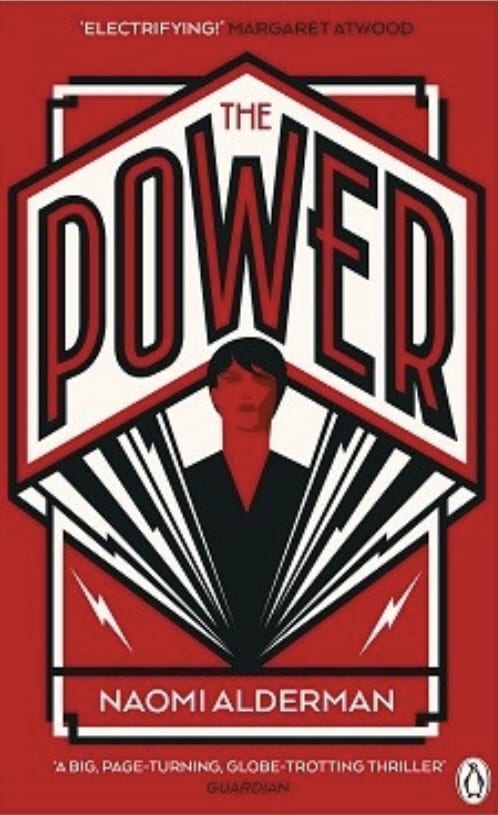 Winner of the Bailey’s Prize for Women’s Fiction 2017

After discussing this book with a number of people, it seems to be one that polarises opinions. I raved about it pretty much non-stop for weeks after finishing it, and such was its effect on me, I was surprised that not everyone who had read it felt the same.  I guess that’s the beauty of literature and, in fact, any creative piece of work.  It’s subject only to the opinion of the person experiencing it. It’s also a great comfort to the millions of struggling writers out there to know that even widely acclaimed authors can’t please everyone.

Many comparisons have been made between The Power and The Handmaid’s Tale. Both books fall into the category of speculative fiction and both tackle issues of gender, oppression and human rights, so it’s easy to see why. Margaret Atwood also mentored Alderman during the writing of The Power, leading some to argue that her influence must have permeated the pages somehow.

But while there are connections, similarities and common themes between the two books, the plotlines, the tone and the premise of each are so very different that, unless I’ve missed something fundamental, to compare them like for like seems unfair. Yes, they both speculate on dystopian futures, but in opposing ways and with diametrically opposing outcomes. One imagines the absolute removal of women’s rights and the other the opposite.

Importantly, The Power does not sit in the shade of The Handmaid’s Tale.

It has its own agenda and Alderman her own style. The Power has absolutely earned its place on the classics shelf and in the school literature curriculum, alongside Atwood et al.

Imagine a world where women are physically capable of overpowering men. It begins gradually, starting with a chance discovery by certain teenage girls, who find they are in possession of an electrifying force that can inflict pain and even death on their victim. Over time it becomes clear that this is a long-forgotten abililty that has been buried for centuries. It’s a global phenomenon that only women, all women, are capable of.

The Power reads like a part-documentary, part-history book, focusing on the lives of four characters who find themselves at the centre of the beginning of a new world.

From page one, it takes off with force and pace, like a literary rocket. I’m sure I’ve never been so excited reading an opening chapter. The agent who received the first draft must have peed themselves because it must have been obvious from the outset that this was going to be a winner.

It’s structured like a ‘book within a book’ – which isn’t for everyone but go with it, I urge you – at the heart of which is ‘The Power: A Historical Novel by Neil Adam Armon’. Armon’s ‘book’ reads like one continuous news story backed up with articles, online forum extracts and TV news items, interspersed with historical research and ‘evidence’ in the form of documents and images.

Complex, intricate, intriguing and brutal, The Power is unlikely to have the ending you expect. But whether or not you agree with the outcome, Alderman has constructed a thought-provoking and terrifyingly, brilliantly believable set of possibilities.

Verdict: It might have the Marmite effect.  Well I happen to love Marmite and I thought it was magnificent. A must-read and a must-teach that will inspire humans of all ages from all backgrounds for years to come.

2 thoughts on “The Power by Naomi Alderman”