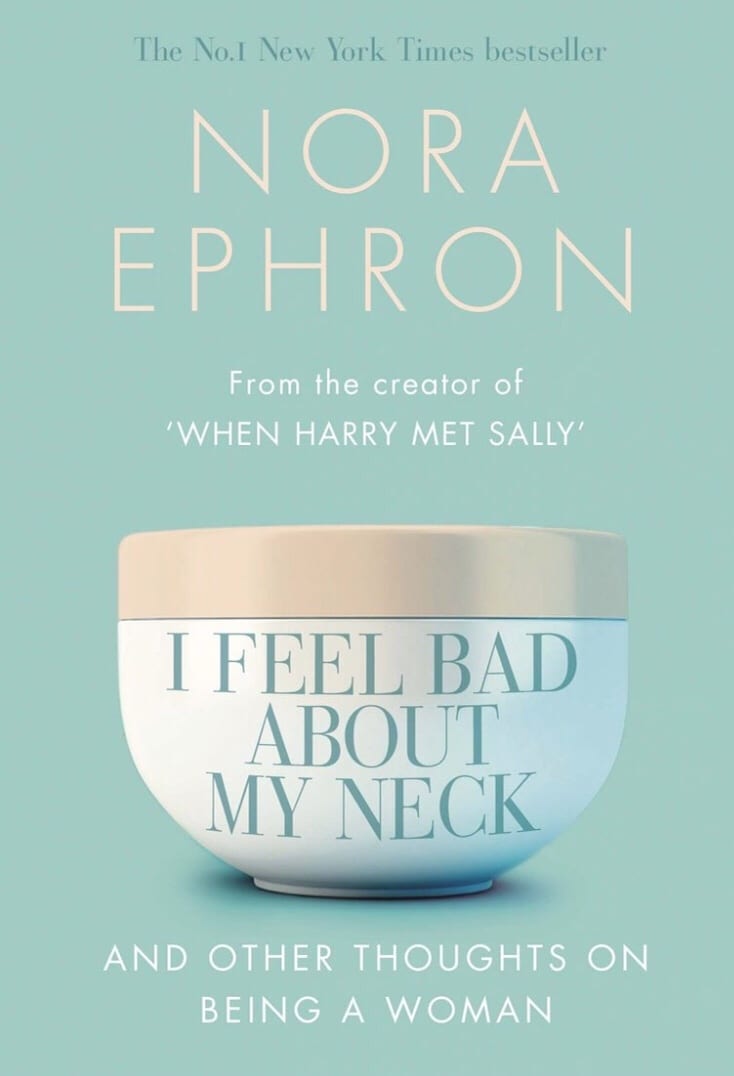 A few weeks ago I wrote a micro-review of this on my Instagram feed (@this_comma_writinglife) but there’s so much to say about this book that I feel it merits something longer. Since it was written in 2006, when Ephron was 65, and she passed away in 2012, aged 71, there have been countless obituaries and reviews. However, one of the purposes of this blog is to inspire readers and writers. Celebrating great, influential women writers of our time is part of that. Therefore, think on this as a tribute, rather than your usual review. If you’re already a fan of Nora Ephron, good! No doubt you’ll know more than me so please share anything of particular note in the comments below. If you haven’t discovered her yet, hopefully this might prompt you to do so.

I Feel Bad About My Neck and Other Thoughts On Being A Woman is a collection of essays that reads like part memoir, part personal guide to the ageing process from writer, filmmaker, playwright and essayist, Nora Ephron as she sees it from the perspective of a woman in her sixties.

First, what a life! Seriously, I mean, what a LIFE. This is someone with so much wisdom and knowledge to impart. She started out as a journalist but is best known for her romantic comedies, When Harry Met Sally, Sleepless In Seattle, You’ve Got Mail and Julia and Julia. Then there are the books, the plays, the marriages – three of them, the break-up of one being the inspiration behind her novel Heartburn, which she then adapted for a film starring Meryl Streep and Jack Nicholson. So. Much. Material.

I Feel Bad... begins with a series of amusing anecdotes and tales about her relationship with food, cooking, men and her family. There’s a wonderfully nostalgic piece on living in the then-infamous Apthorp Building in New York that is so evocative of the time and sounds so unbelievably exciting and glamorous that after I’d read it, I immediately started Googling flights to NY and rental costs for apartments on the Upper West Side.

For the majority of the book, it’s easy to forget it’s a collection of essays, such is the natural flow and stream-of-consciousness style.  However, about eighty per cent through (in Kindle terms) the subject turns to Ephron’s love of reading and of books and within a page, the razor tongue and acerbic wit is replaced with an altogether more endearing and wholesome tone. Fittingly, the title of this section is On Rapture.

In it she talks about the power that certain books and authors had over her and the fact that she can remember where she was and at what stage in life she was at whilst reading them.  Some of the most memorable include Doris Lessing’s The Golden Notebook (on her corduroy couch, after college), Mario Puzo’s The Godfather (on the now re-covered couch, for pleasure), Le Carré’s Smiley’s People (guest bedroom, after her second divorce) and, ‘probably the most rapture-inducing book of my adult life’, Wilkie Collins’ The Woman in White (on a chaise longue at the beach, summer).  In her imagination, she wrote letters to authors telling them what their books meant to her: 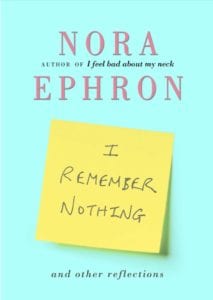 After finishing this book, feeling bereft and in need of more Nora, I immediately read her final essay collection, I Remember Nothing and Other Reflections, which, I’m pleased to report, is just as beautiful and poignant and funny and intelligent.  In I Feel Bad… Ephron says it’s ‘too bad’ that writers like Anthony Trollope and Edith Wharton are dead and can’t be written to.

I know what she means.  As she says of The Woman in White:

“How could I have waited so long to read this book?”